I have always seen myself as a very rational and logical person. I have no problems acknowledging my ignorance when due, but if I have an opinion it’s usually a strong one. However, I have lately been looking at opinions and conversations in a different way.

First let me start explaining how I used to approach conversations about opposing opinions. Logical thinking fascinates me, and it’s something I try to base all my reasoning upon. That’s why in many of my conversations I end up saying “you’re not being logical”. I don’t mean to dismiss anyone’s arguments or call them stupid. I mean, literally, that they are not being logical. Logic is not something subjective, it has a formal definition and it’s guided by two simple concepts:

Therefore, a conversation using logic can be reduced to contrasting axioms upon where an opinion is formed. When there is a disagreement, it means somewhere along the train of thought there is an axiom both parties don’t agree with. But once that happens, that axiom can be broken down further into more axioms, and this process keeps repeating.

This can be modeled as a statements Tree. Each node represents a statement, and their children are connected by rules of inference. A conversation driven by logic would consist in navigating the tree in a pre-order traversal. When both parties agree on a node, it’s not visited further and taken as valid.

Since this is a bit too abstract, let me illustrate with an example. Here’s a conversation between person A and person B both in text and in tree form: 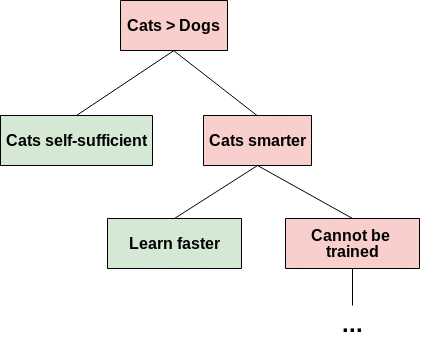 I’m not saying that I like cats more than dogs, maybe I’ll leave my opinion on that for a different post.

What I just explained is obviously an idyllic approach. In reality, when I had a conversation, one of the following situations would arise:

After all, how can an opinion be valid if it can’t be argumented properly? Most of the time, what happened is that statements were argumented with fallacies instead of proper rules of inference. And for me that was the end of it: I was right, they were wrong.

But reality is not that simple. One clear example is experience; if a statement is argumented with experience, that’s technically a fallacy, because the fact that something happened in one instance does not justify generalizing. But in human terms, it’s undeniable that experience can be a valuable argument. And it’s not only that, there’s also efficiency. If a conversation is approached like that, it can be dragged for too long. That’s ok if you like to ramble, but in practical scenarios that’s not the most efficient use of your time.

If you read up to this point, you may be thinking that this structured view of conversations cannot be used by humans and it’s worthless. But there is a middle ground. Other than agreeing on a statement, there is a different way to continue: Heuristics. That is, to let a statement slide even if it’s not 100% valid.

We already do this naturally, or conversations would never end, but there is one heuristic in particular I want to highlight: accepting disagreement.

Why it’s fine to disagree

Let’s face it, nobody is perfect. You can see how I used to think before, but really I wasn’t that logical either. If I were, my opinions would never change, and I’ve certainly changed my opinion in multiple occasions. So the first thing to realize is that there is no absolute opinion, not even yours. If you could talk with yourself a year in the future, you would probably disagree on multiple things. Heck, even talking with yourself a week from now. And that doesn’t mean that you are more right or more wrong, it means that you’ve changed and that’s part of human nature, so let’s embrace it.

There is also what I mentioned about efficiency. I have started treating opinions differently. I never actually thought that I was always right, it’s just that I thought having two opposing opinions meant that one was wrong and one was right. More often than not, both opinions have part of truth so in the end it’s not a question of which one is 100% right, but rather how true is each one. And maybe it’s 50/50. And maybe that changes everyday. At the end, what this means is that sometimes it’s ok to disagree on something and accept that as part of the conversation.

Since I started thinking that, I have to say that I’ve learned more than ever. In fact, I’ll go even further, I’ll say that opposing opinions are necessary. If you are not exposed to different opinions and take them seriously, you risk staying inside of your own small opinion bubble. And I can assure you, regardless of how smart you are or how much you know of a specific topic, different opinions are the secret to growing and learning. It’s now easier for me to accept a different opinion, and contrary to making my opinions less powerful they are enriched by this. As one misquote I find very useful says: “The real voyage of discovery consists not in seeking new lands but in seeing with new eyes”. Another way of interpreting this is thinking about Food for Thought. If I don’t agree with something but it makes me reconsider my assumptions, that’s great. Just be sure to separate actual food for thought from time wasting.

Something I am contemplating as of late is how many of my opinions are really mine. It may seem stupid to ask this for someone who said “I usually have strong opinions” at the beginning. But it really is something worth thinking about. How do you know your opinions aren’t just a mix of what you read, what you see, what you listen to every day? Your environment affects you more than you think, that’s why cultural and environmental differences explain how some similar people have radically different opinions. The more opinions you're open to, the broader your bubble will be and you'll be more you.

At the end of the day, thinking about the statements-tree model in a real conversation is really interesting, because I’m sure an analysis of how the tree is traversed would look like chaos. The way we drive conversations is more art than logic, even for the most logical individuals. And being able to do that is remarkable, that’s why I think machines still have a long way to go to replace humans.

Now don’t go to the other end of the spectrum and be contempt by disagreeing on everything and not using logic anywhere. There isn’t a singular mindframe that’s perfect for everyone, but I’m sure thinking about this and contemplating both extremes will help you be more self-aware and become a better learner.