I've been a proponent of transparency and working openly for a while, but I struggled to translate this into something actionable myself. So I came up with this new methodology: Open Productivity.

I recently joined Seth Godin's The Bootstrapper's Workshop, and one of the concepts introduced is that of finding the Smallest Viable Audience. This is related to something I learned from Chase Jarvis, he calls it building a community. It's also similar to something Derek Sivers suggests: focus on who you want to help instead of the product you're building.

These concepts are not the same, but they are closely related. And they mean that you need a human factor for success. I used to think that it was possible to focus only on the product, but every day I'm more convinced that's not true for the kind of work that I want to do.

That's why it's necessary to expose your work, create human connections and know your audience. Communicating your work is as important as the quality of your work.

I have been aware of this for some time, but I haven't been great at doing something about it. My initial reaction was "Ok, I'll interact more with others. I'll join communities that resonate with me and I'll start giving more feedback to creators that I follow". And this has been positive so far, but it isn't nearly enough.

Right now I don't really expose my work, so I don't think anyone actually knows what I do other than myself. It's time to change that.

Over the last years, I've actively reduced my exposure to social channels. I don't use Facebook, I'm not subscribed to any news outlets, I try to suppress as many notifications as I can, I turn my phone off every day when I go to sleep and I don't turn it on until I've completed my morning routine the following day.

The only social networks that I use are Twitter and Mastodon, and I don't even check them that often.

I'm all about productivity, and I've written about it multiple times. That's why my time is allocated to planned activities. And I consume content mostly from sources that I trust.

In summary, for me productivity is related to isolation. I reduce the noise around me and work from first principles, studying and learning on my own accord.

But this clashes with the idea of building human connections. And I'm also aware that I have a lot to learn from interacting with others. I tried to allocate some tasks to "interact" but it felt forced and unnatural. What's helped me is changing my mindset about consumption, interacting more with the content that I already consume.

Thinking how to align these two is how I came up with this new approach.

I thought I was already "working in the open" because I started publishing my code on GitHub, but if no one is watching it's like it isn't there. There is also a lot of context and reasoning that's missing from the code. So I could do a better job at that.

Some months ago I came across Doug Belshaw, and I've been following his work ever since. I think he's a great example of what working in the open means, and he's inspired me to take action.

I've come to the conclusion that a great way to do it for me is merging the productivity system I already have with my communication channels. And that's what I call practicing Open Productivity. Here's a diagram trying to convey what I mean: 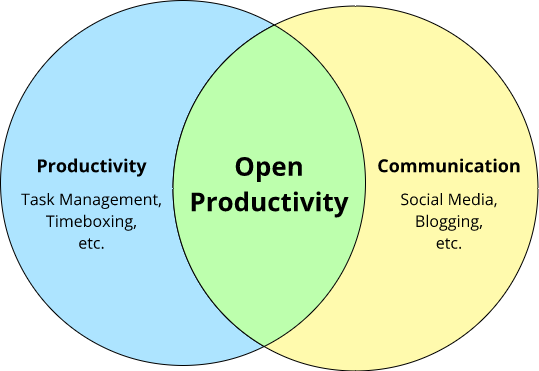 With this, I'll begin to document my journey and it'll be easier for anyone who finds me to learn what I do. I also expect to increase my interactions, so ping me when you have anything to say!

Starting today, you'll be able to follow my progress in my "now" page at noeldemartin.com/now.

I plan to mix it up with my communication channels, so you should also see a difference if you're following me on Twitter, Mastodon or my blog.

2020 Update: I've written a follow up to this post after applying these ideas for a while, check it out: Working in the Open When No One Is Looking