You Can't Always Get What You Want

The Stones knew it.

Maybe you want to get a successful business by making a great product, but you need Marketing.

Maybe you want to get your dream job by honing your skills, but you need Networking.

Maybe you want to get lean and eat cake, but you need a healthy diet.

Sometimes, what you want is not what you get.

We are wired to believe that life is fair. In our minds, we know it isn't. But in our hearts, we feel it must be. And so, we get surprised and outraged when we meet unfairness. Specially when we are the ones getting the short end of the stick.

This is not a good strategy.

A better approach is to decide what you care about and ignore the rest. It comes down to efficiency. You can improve anything, but you can't improve everything. You may as well focus on the things you care about the most. 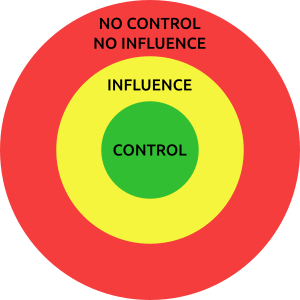 Mental bandwidth is one of the most important assets at your disposal, you shouldn't waste it worrying on what you can't control. Actually, you should never worry about anything. If you've got a problem and you can do something about it, do it. If you can't, accept it and move on.

The illusion of control

If you think you know what's in your control, take a look at the tragedy of the commons.

The tragedy of the commons is a situation in a shared-resource system where individual users, acting independently according to their own self-interest, behave contrary to the common good of all users by depleting or spoiling the shared resource through their collective action.

In these situations, by definition, the actions of a single individual can't decide the outcome. Collective behaviour does. You can only have influence over the results.

The prime examples are environmental issues like global warming. But these principles can be applied to many situations in life. They explain the uneven distribution of wealth, why scientific innovation stagnates, and in general why life is not fair. Once you start thinking about it, you'll see that the tragedy of the commons applies everywhere. It's the essence of human struggle.

Garrett Hardin wrote one of the first pieces on this topic. In that article, he explains why it is up to the system's rules and not individuals to affect the results. He also reveals that individuals acting in good faith can be harmful to the commons without realizing. And that tells us a lot about the nature of the problem, it proves that there isn't always a secret evil plan going on. It's just how things are.

Ultimately, the only thing you can control is yourself.

Anything of which you are entitled the owner is in your possession but is not your own; for there is no strength in that which is weak, nor anything lasting.

Seneca, On the Fickleness of Fortune

If there is a philosophy that embraces this idea, that is Stoicism. One of the tenets of Stoicism is to accept things as they come, with no expectations and no lamenting. The Stoics see Ataraxia as the ultimate state of mind, similar to how Buddhists see Nirvana. However, this is not something Stoics aim for, but a consequence of living with equanimity.

In a way, understanding the inherent lack of control in life is the essence of Stoicism. One advice you will find reading Stoic philosophy is to surrender to your fate. This can seem counterproductive, because we often associate the word "surrender" with defeat. But in this context, it's interpreted as an aptitude of acceptance.

There are many stoic exercises you can do to practice this. Negative visualization will help you appreciate how privileged you are. And practicing hardships like fasting or retreat will improve your endurance.

My idea of the modern Stoic sage is someone who transforms fear into prudence, pain into information, mistakes into initiation, and desire into undertaking.

One step beyond accepting the unexpected is to gain from it. Antifragility, a concept developed by Nassim Nicholas Taleb, describes the property of systems which improve with shock instead of deteriorating.

Since we have asserted that life is full of things we can't control, leading an antifragile life is guaranteed to make you better. You can use obstacles to your advantage.

Imagine that you are suddenly fired because your employer goes out of business. This is usually seen as a bad thing. However, if you have enough savings to avoid depending on your salary in the short term, you can use this opportunity to grow. It can be reframed as a good thing because it kicked you out of your comfort zone. Like the quote attributed to Taleb says, "the three most harmful addictions are heroin, carbohydrates, and a monthly salary".

There are other parts of your life where you can apply the same principles to be antifragile. Rent instead of buying, diversify your skillset, avoid ruin.

Goals are only good insofar as they help you move in the right direction. Expectations only lead to disappointment.

Instead, use heuristics like maps and compasses. But the map is not the territory and there is no perfect compass. Always expect the unexpected, the only constant is change.

And remember. You can't always get what you want. But if you try sometimes, you just might find you get what you need.